Perspective Professor Ken Giller on the Politicization of Agriculture 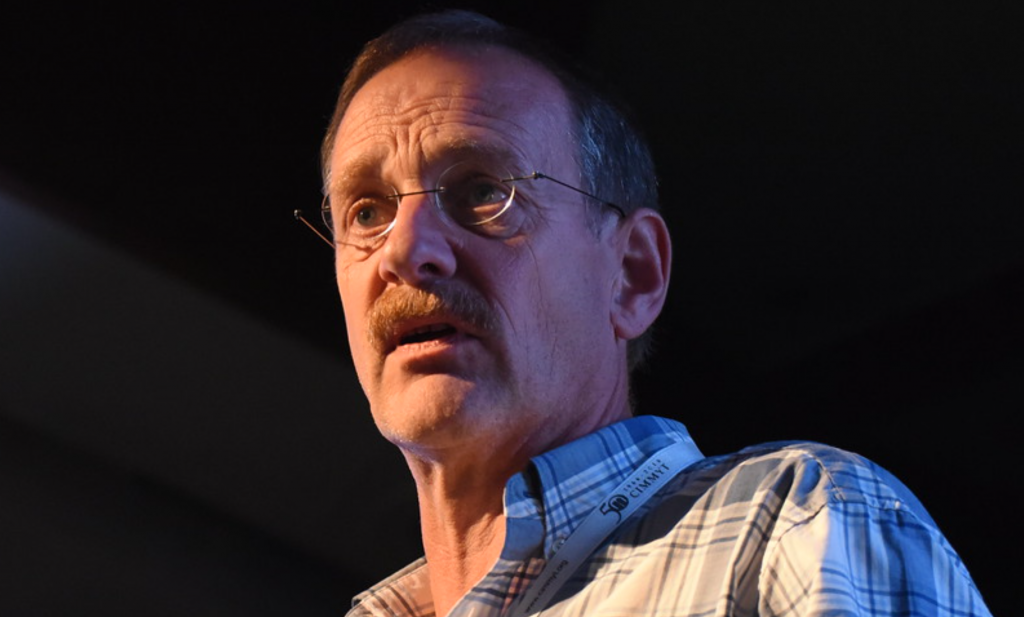 0
Photo credits: 'Ken Giller', Gerardo Mejía/CIMMYT, via Flickr
"For decades, little attention was paid to agriculture and to agronomy. Thanks to climate change, loss of biodiversity and the prospect of having to feed a few billion extra mouths in the near future, a golden age is dawning for the discipline," says Ken Giller, Professor of Plant Production Systems in Wageningen. The starting point is the diversity and complexity that farmers all over the world have to deal with.
Related
Ken gets irritated by the aplomb that is used to present certain concepts as the unique solution to the world food problem. Some years ago, he wrote a critical article about conservation agriculture. Extensive crop rotation, not till or hardly any ploughing, and remains covered by the use of catch crops and litter of crop residues is considered top of the bill, but fails to deliver. More recently, he and his colleagues wrote an equally critical article on regenerative agriculture, a similar series of measures aimed at improving soil fertility and carbon storage. According to Giller, agroecology also promises more than it can deliver.

Joost van Kasteren: What irritates you about these concepts?
Ken Giller: "Don't get me wrong, I don't want to be too negative. The proposed measures will work for some farmers in specific circumstances. What bothers me is, firstly, the almost religious conviction with which these concepts are sold and, secondly, the suggestion that they have universal validity. This does no justice to the diversity of farms and the complexity that farmers face all over the world. Moreover, they often project a Western view of agriculture in developing countries without recognizing the perspective of local people with their specific concerns and problems."

"Small farmers in Zimbabwe, for example, could not use conservation agriculture at all, because they have no money for herbicides and because crop residues are too important as fodder for their cattle to use for mulching. In Malawi, development organizations and the FAO put great pressure on small farmers to turn over to conservation agriculture. There was money available for herbicides, but the switch created new problem. In the famine period, when the crops are still in the fields, the poorest households in particular can earn money by weeding, but that income was lost due to the use of herbicides. So, the interventions led to an increased incidence of hunger.”

Almost everything people say about agriculture holds true for some farms at some point in time, but that does not make it a general cure for all of agriculture’s problems

Surely certain principles should be widely applicable? Why else do we do research?
"Almost everything people say about agriculture holds true for some farms at some point in time, but that does not make it a general cure for all of agriculture’s problems. In the run-up to the United Nations Food Systems Summit, which was held in September, you regularly read statements that 'the food system is broken'. But what does that mean? And, not unimportantly, why do you say that?" We are all working towards a better world where people have access to sufficient and safe food of high nutritional value, but the discussion about agriculture and food supply is dominated by specific framings – particular, selective representations of reality. Advocates of the framing of regenerative agriculture or of agroecology oppose the framing of industrial agriculture, but what is meant by industrial agriculture is not clear."

"Movements like regenerative agriculture or agroecology, and the advocates of high-tech agriculture suggest that they have a universal approach to fix a broken system. But this is not compatible with the enormous variation in local conditions that farmers face. These include not only physical conditions, such as climate, soil and water management, but also ecological, economic and social realities. With those simplified framings, you deny the complexity of reality."

Does that framing also affect research?
"Yes, I think it makes research more and more politicized. For example, the High Level Panel of Experts, a scientific advisory body to the FAO, recently issued a report on agroecology. In that report, they looked at things like agroforestry, strip farming and crop diversification and their effect on food security in a changing climate. Within itself, this was useful, but the strange thing was that these measures, which have been researched for decades in all sorts of agricultural systems, were swept together and recommended under the heading of agroecology. As such, the High Level Panel of Experts advocated a universal approach based on a limited number of measures, while very little research has been done on those measures at the level of the farm or farming system. As far as I'm concerned, that doesn't meet the requirements you can set for scientific advice."
"Another example is the report by the Council for the Environment and Infrastructure (Rli) in the Netherlands 'De bodem bereikt', in which the declining quality of Dutch soils was described in rather dramatic terms. As a soil scientist, I simply cannot accept that. Soils in the Netherlands have few problems, however there is little or no erosion or soil degradation. Certainly not if you compare it to Africa. There are certainly matters that require attention, but that does not justify the alarmist wording used by the advisory council on soil quality in the Netherlands.

In that context, what do you think of the European Commission's plan to reduce the use of artificial fertilizers and to promote organic farming as part of the farm-to-fork strategy?
“I was really surprised that the European Commission wants to reserve a quarter of the agricultural area in the EU for organic farming. In my opinion, this has not been thought through properly. Combined with the aim of significantly reducing the use of artificial fertilizers and expanding the area of nature, this means that the European Union will produce far less food. I do not know whether that is the intention, but it ignores broader spill-over effects. If less food is produced here, more food must be produced elsewhere in the world. That can have positive effects, such as a new market for farmers in Africa and South America. But it can also lead to land use change through deforestation and the clearing of savannahs in Africa and the Cerrado in South America. In a similar vein, organic farming can work well for some farmers and consumers in Europe, but you should not impose from above that a quarter of the acreage must be reserved for it."

"The problem is that the social discussion about agriculture is increasingly clouded by unclear definitions. As a result, all sorts of things are lumped together that have nothing to do with each other. All agrochemicals, for example, are easily lumped together and labelled as toxic. ‘Chemical’ agriculture is framed in opposition to natural, organic agriculture. But, of course, there is a huge difference between pesticides, which are, by definition, designed to be toxic to certain organisms, and mineral fertilizers, which are a mixture of essential nutrients for plants that are environmentally benign if used properly. A plant also sees no difference between phosphorus, nitrogen and potassium from fertilizer or from animal manure."

If you want to build up a sustainable food system in Africa, you cannot do without mineral fertilizer

Giller has done a lot of research among small farmers in sub-Saharan Africa, including on the use of nitrogen-fixing legume crops. Despite the potential of biological nitrogen fixation, he is convinced agriculture cannot do without artificial fertilizer.
"In the Netherlands, we could perhaps do with less, but if you want to build up a sustainable food system in Africa, you cannot do without mineral fertilizer. Beans, peanuts, chickpeas and soyabean can meet some of the nitrogen needs, but in order to fix nitrogen, these crops also need phosphorus, potassium, and a series of other nutrients. You cannot address this with animal manure and compost alone. Africa's agricultural soils are too poor for that and there is simply not enough manure."

"In the N2Africa program, we have shown that the cultivation of leguminous plants is a protein and micronutrient rich supplement to the diet. An additional advantage is that the fixed nitrogen also gives a higher yield if you then grow maize in the next season on the same plot. In addition, leguminous plants in the crop rotation system suppress the growth of certain persistent weeds, such as the witchweed, Striga. All in all, this increases the yield of maize from 1.5 tonnes to 2 to 2.5 tonnes per hectare. That is quite a lot of course, but it is nowhere near enough to feed the growing population. Demographers expect the number of people in Africa to double within the next 30 years and even quadruple by the end of this century. So, we cannot escape the use of fertilizers if all these people are to have a nutritious diet and if we are to avoid further expansion of agriculture into forests.

In a systems approach, you assume that agronomic knowledge is ‘place-based’

Finally, how can we bring about that golden age for agronomy. Not a universal approach, but what then?
"As I said, universal approaches such as regenerative farming or agroecology fall short because they do not account for the enormous diversity and complexity that farmers face worldwide. In reality, the agricultural world is incredibly dynamic, facing new challenges which are both ecological, such as the introduction of new crops, but also new diseases and pests, as well as economic and social trends. That is why I would call for a systems approach; what we call a systems agronomy.”

"In such a systems approach, you assume that agronomic knowledge is ‘place-based’. There are of course the proven, theoretical insights from production ecology about the influence of light, water, and nutrients on crop production. In the past, those insights were applied at farm or field level with the ambition of closing the gap between theoretical and actual production, the yield gap, as far as possible."

"With a systems agronomy approach, you look more broadly. Not just considering the economic possibilities and limitations and the ambitions of a farmer, but also the broader context. Farmers depend increasingly on each other for the use of machinery, for the exchange of labor and for social support, for example. That is why we also work intensively with sociologists and economists to explore the socio-economic and cultural context. Such a systemic approach is actually quite obvious, if you at least want to get away from the idea that there is a universal approach. If we succeed in making this work, we will witness the emergence of a Golden Age for agronomy."