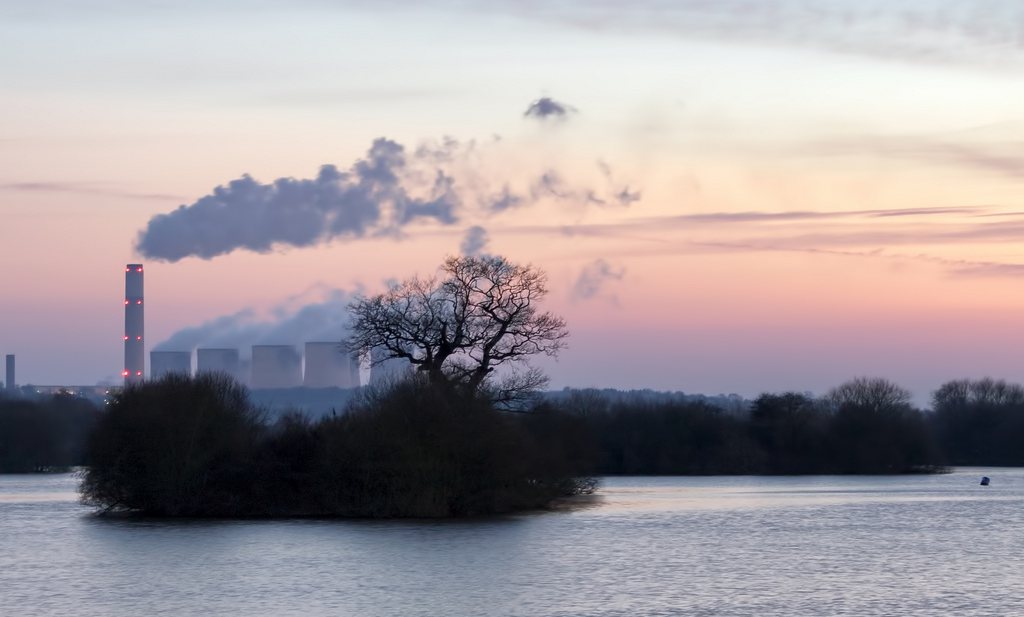 0
Photo credits: 'Emission', Arran Bee
Just 5 years ago, one in five companies tracked either their carbon footprint, biodiversity footprint or environmental impact. The majority of the participants in the recent AgriFoodNetworks webinar The CO2 Mismatch, said it is necessary to measure all three of these footprints. In the webinar, modeler Hans Blonk explains the standards, tools and data involved in footprinting. Surprisingly, he shows that as businesses come into play, a painful gap becomes visible between national reduction targets set by governments and - as it should be - reduction strategies to make the products we consume climate and environmentally clean. The impact of companies is more focused because they demand commitment throughout the chain. Blonk recommends connecting national policies of governments to the cross-border Food Value Chain perspectives of business.
Related
Until recently, retail chains shifted their sustainability requirements to their suppliers. After all, the retailer only has to provide a sustainably lit, refrigerated, heated, supplied and home-delivering store. Their suppliers are responsible for the sustainability of the palm oil in the cookies and the sustainable soy feed for the chickens you get eggs from.

Subsequently, suppliers had to figure out how to prove that they met those requirements and see on what basis they were rewarded for their efforts. Nor was and is it always clear why they have to meet one set of values for one customer and another set of values for another. Nevertheless, meeting all these different lists of criteria is a requirement that producers cannot escape.

"They do not get anything extra for that," says Hans Blonk. "Nowadays every retailer has their own standard but nobody pays a better price! Standards should make the chain more transparent, so that a reward can be gained earlier in the production chain, or that there is an increase in costs for those who don't comply."

This is precisely where Blonk Consultants comes in. The consultancy develops calculation rules that make it clear to suppliers, retailers and consumers who, and where in the chain, has contributed what effort to the total CO2 sustainability of a product. With these rules everyone's contribution can be transparently established in such a way that it is possible to negotiate well-founded rewards.

Food value chain
Blonk is specialized in making Life Cycle Analyses (LCAs). The starting point of an LCA is the entire chain from the seed and plant to your plate, the complete Food Value Chain. It starts with the photosynthesis of plants (Cultivation) and then undergoes processing, refining, mixing of ingredients and making a consumer product that we buy at the supermarket or McDonald's and La Place. 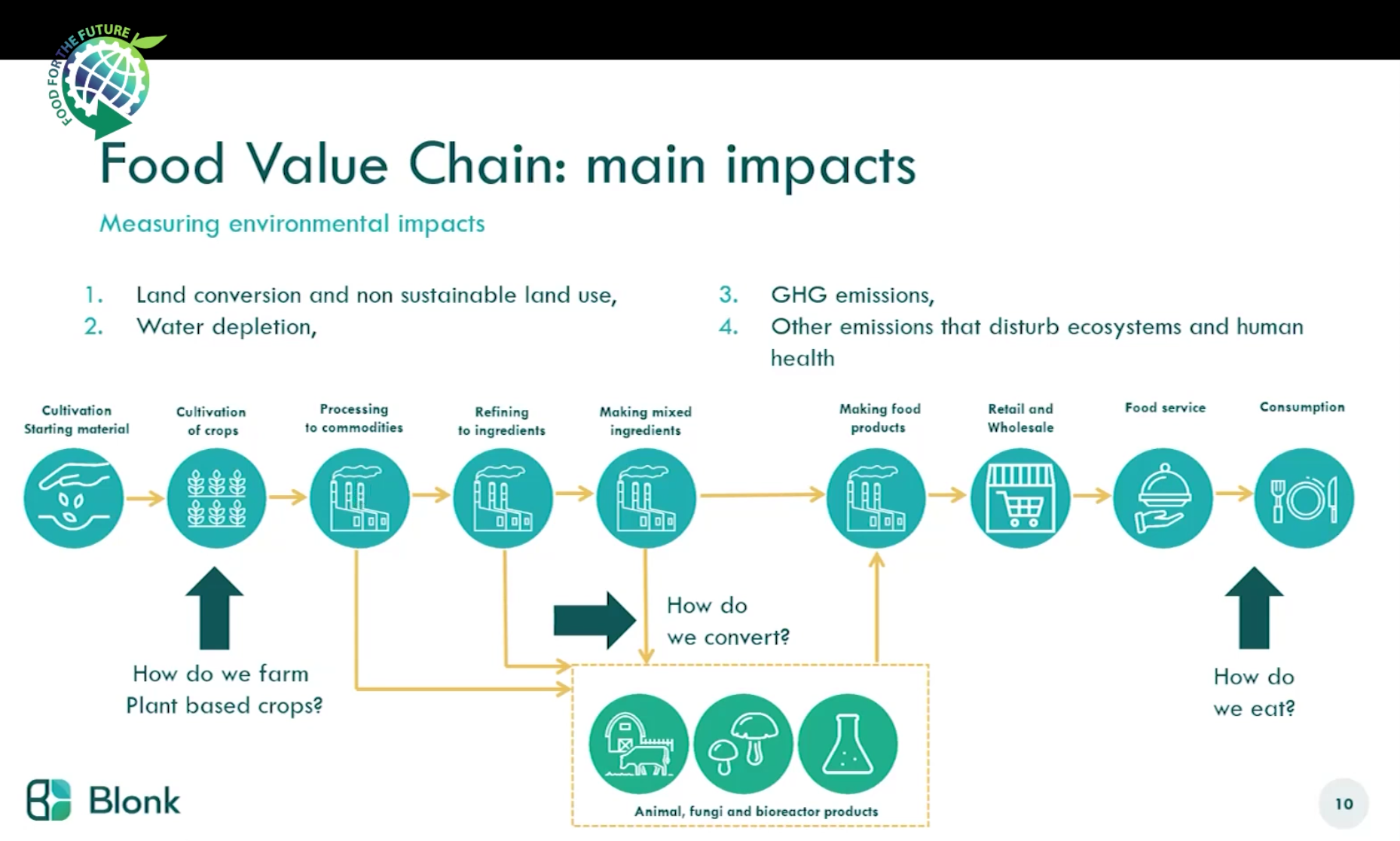 The greatest environmental and climate gains are to be achieved at 3 specific stages in the Food Value Chain: by improving cultivation, by eating differently (reducing demand and waste) and by switching from crops grown for fuel (such as grapeseed and sugar cane) to crops we can eat.

LCA ‘endpoints’
Nowadays, we have several LCAs. We all know the CO2 footprint, which can also be extended to other greenhouse gases such as methane and nitrous oxide. The environmental footprint is also no longer unknown. A more recently developed LCA is the biodiversity footprint. All ultimately translate from a number of impact categories through so-called damage paths into damage to certain endpoints: ecosystems, human health and available natural resources.

"By far the biggest impact factor is land use and converting nature to farmland," Blonk says. 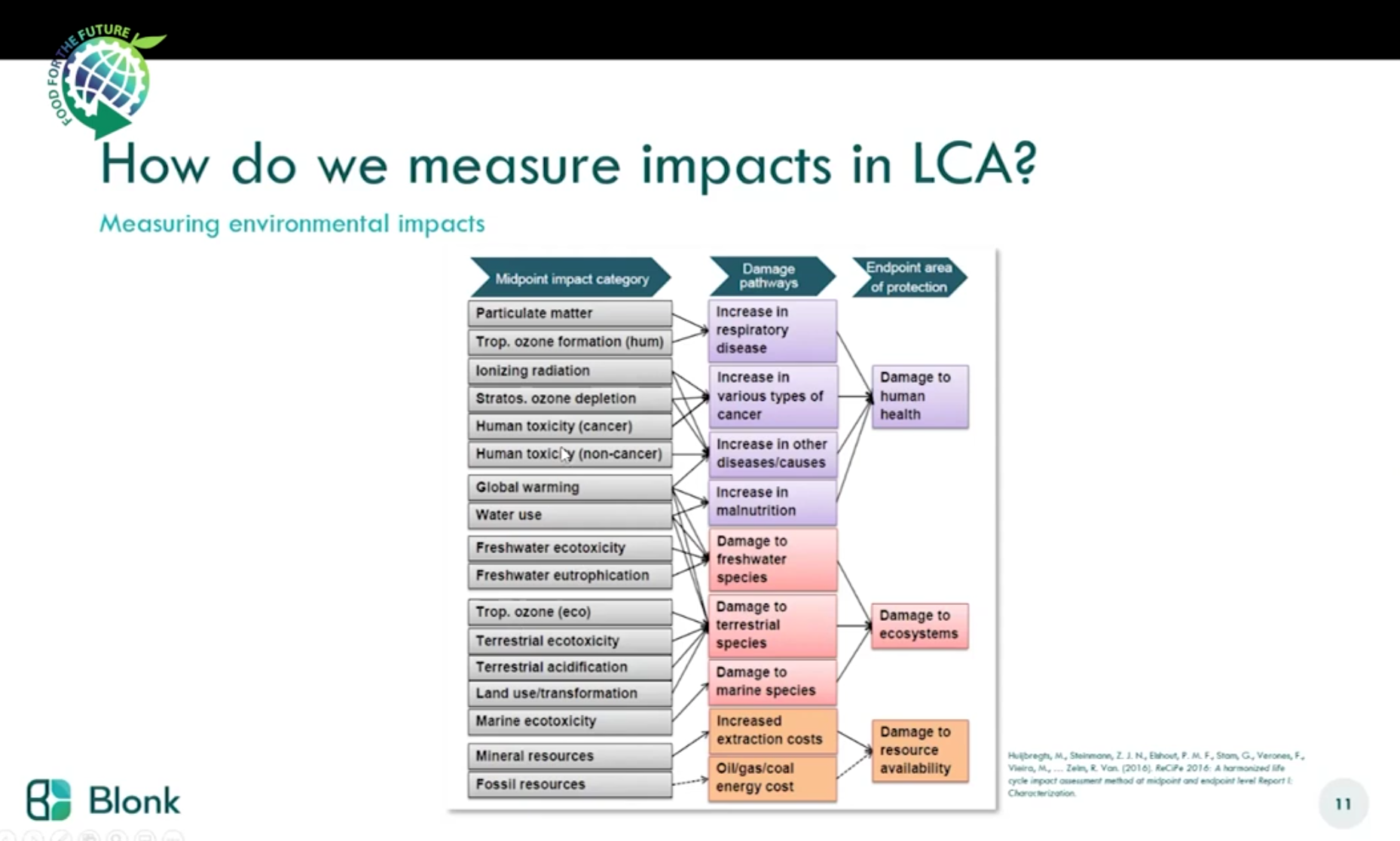 To set up an LCA, you first determine the 'product unit' for which you want to determine your footprint. A liter of milk? A kilo of pork or a kilo of tomatoes? Next, you start working with the operational data from your own farm. A farmer who produces milk knows how much fertilizer he uses, how much feed he buys and how much energy he uses. These are all types of primary input data.

Then he can ask his suppliers what their inputs were. If they don't know this - or if they are just working on their LCA themselves, Blonk winks - plenty of secondary databases with general data are available. Finally, he can calculate the emissions using a model. And voilà, your footprint is ready, thanks to the numerous standards and tools that have been developed.

If the data firms and their service providers want to help out by making it possible for the base data for various standards to just be plugged in so that the various platforms in the chain can be connected from soil and seed to plate and pork chop, then environmental footprinting becomes very easy.

Subsequently, everyone in the chain can start working specifically on improving those points that they can directly influence. Using a detailed example, Blonk shows that, for example, the greenhouse gas footprint of a kilo of pork can be significantly reduced by using less land for cattle feed.

With this insight, parties in the chain can start discussions and make agreements on realistic goals that are highly relevant to climate and nature. Unfortunately, it is precisely at this point that a major disturbing factor comes into play. 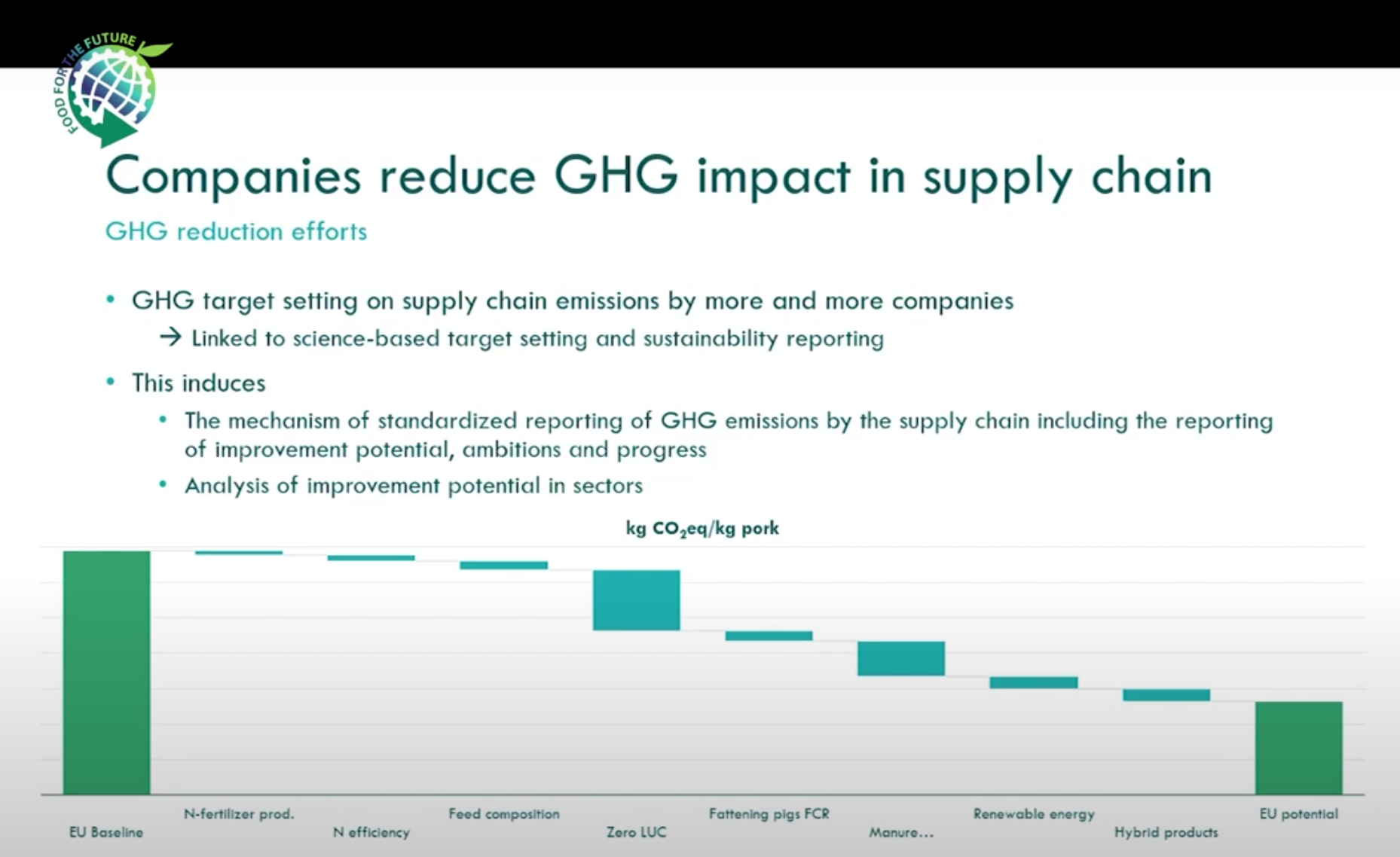 Mismatch
Governments do not care about a footprint at the product level, but look at reduction at the farm level in the Netherlands. Governments do not take the relationships and dependencies between parties in the chain into consideration, such as the CO2 footprint of animal feed.

Improving the footprint of a kilo of pork, which does matter to consumers and to nature, is of no interest to the government and therefore they do not reward it. In the video below (starting at minute 55), Hans Blonk explains this, using the following image: 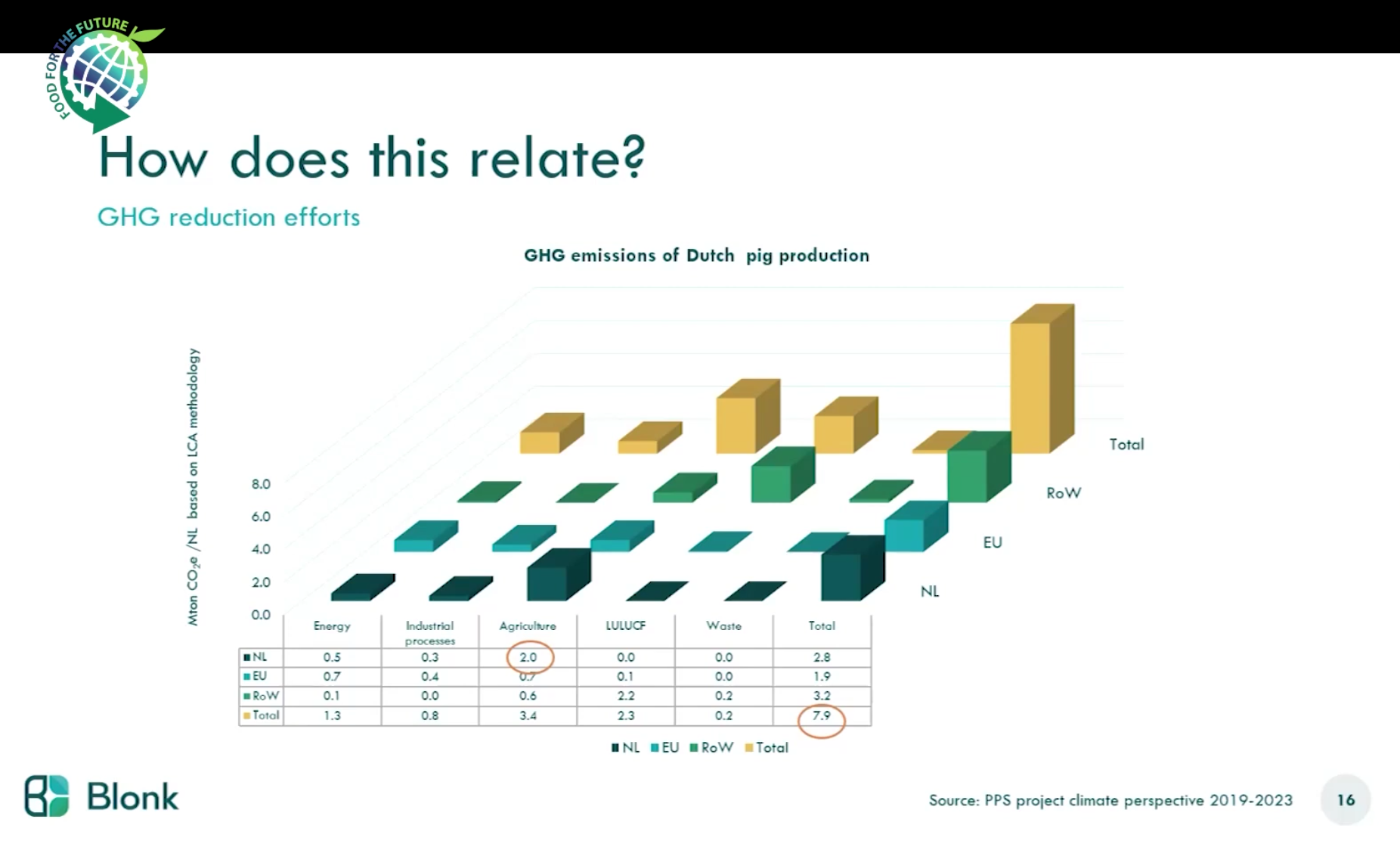 The Dutch government wants to reduce emissions from the pig industry in the Netherlands. "That is a totally irrelevant focus and an example of the complete mismatch between the industry-wide efforts of companies and the end-goals of the policy," says Blonk.

According to him, the government focuses on a 'fraction' of the potential impact by maintaining a national view and, for example, excluding feed with lower CO2 from other countries in its contribution to the climate challenge. The pig industry itself does focus on that larger goal, namely the international chain. After all, Dutch pigs eat feed that has a major climate and nature impact somewhere else but is determined by us here.

It is therefore necessary for the government and companies to synchronize their view of the chain as a whole versus what only happens nationally. The government does not inspire an integrated approach and to some extent allows companies to cut corners. While companies - surprisingly - take the logical approach. That cannot be the purpose of climate policy.


Hans Blonk (Blonk Consultants) is well known as 'Mr LCA'. After studying biology in Leiden, he became increasingly intrigued by the impact humans have in managing biological systems, including waste streams and emissions. He now helps people and companies understand how biological systems feed us all and how we can reduce our impact. His clients include farmers, suppliers to farmers, bulk producers, food manufacturers, retailers and food service companies, technology service providers and data management systems.
Comment
Related
Comment