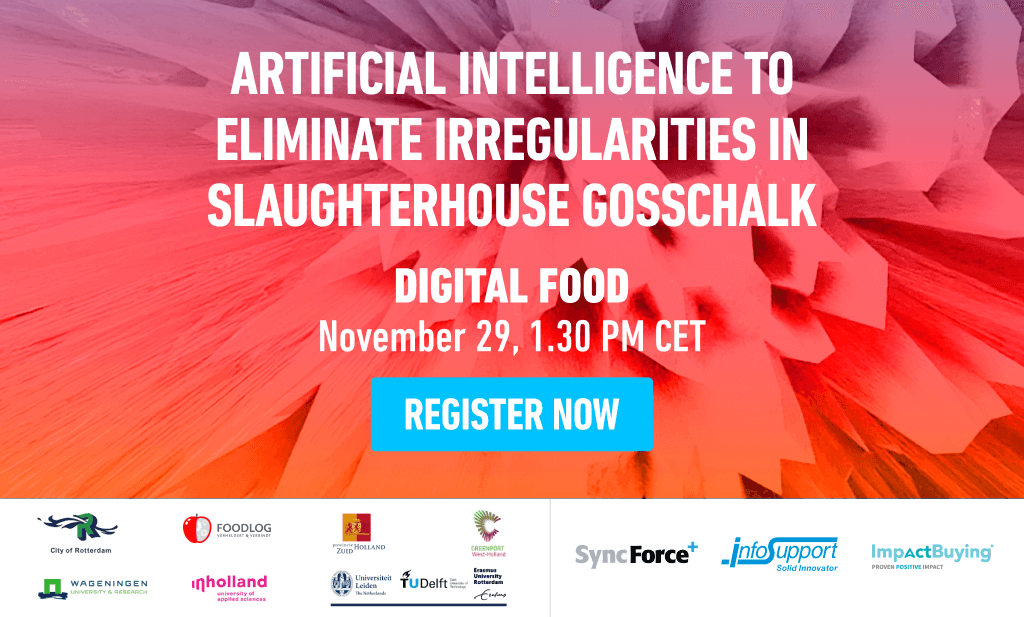 0
Join us on Tuesday, November 29, from 1:30 PM till 2:15 PM (CET) + 45 more minutes of informality (if you care to stay on) for the eighth use case in our Digital Food series. Registration is no longer possible.
Related
In June of last year, Slaughterhouse Gosschalk had to close down due to irregularities as seen on footage made by an animal activist. After drawing up a sound plan to prevent future abuses, the company was allowed to reopen.

Part of this plan is an automated animal welfare analysis system. The used software system called Argus (developed by {SAAS}) provides an objective analysis of all activity in the abattoir demonstrating for instance if an incident is accidental or a structural wrongdoing. Even more so, through data collection, Argus builds up trend analyses, allowing for substantiated assessment of changes in the process. For example, the regular walking routes are analysed and Argus allows for a well-structured way to identify risk events and bottlenecks in the process.

How does it work?
Argus connects to the local camera system (CCTV). Moreover, the system registers the use of lairage equipment such as stimulators, hand masks and stunning rods, next to ambient values such as temperature and decibel level.

Artificial Intelligence (AI) analyses all collected data – video and censoring. When an animal or a human does something not according to protocol – think of a pig being left behind by the herd or incorrect emergency stunning by a person – it is marked as a point of attention. Similarly, with a small remote control, employees can set such points at the push of a button.

Through data collection, Argus builds up trend analyses, allowing for substantiated assessment of changes in the process

When something critical occurs, like an animal showing signs of consciousness when it shouldn’t, the system provides direct feedback to internal supervisors, by for instance visual or acoustic alarms or even by stopping the slaughtering track.

These moments are highlighted in the web portal where Gosschalk’s Animal Welfare Officers evaluate the recordings. In addition to internal use, it is also possible to have external parties participate in Argus. At Gosschalk, animal-welfare organization Eyes on Animals has access to all video and censor data. In the future, the Dutch Food and Consumer Product Safety Authority (NVWA) could use this system to do (part of) their auditing.

AI is as good as its input
The makers of the Argus system indicate manually what is considered desired and what is considered unwanted behaviour. The basis is for sure legislation and regulation, enriched by conversations with and information from, for instance, the NVWA and Eyes on Animals. The usage of data from other slaughterhouses using Argus will increase the learning capabilities.

Join the conversation
Niels Ilmer of Argus will explain how the system works and how it continuously improves. Roy Melsert, Animal Welfare Officer at Gosschalk, will introduce and explain the way he uses the system and how it helps him to assure a prominent level of animal welfare in his everyday work.

Niels Ilmer launched his software start-up, Ilmer BV, in 2007 while studying computer science. At the time, he had substantial knowledge about and network contacts in the slaughtering sector. Using these assets, Ilmer BV concentrated on developing custom software and websites for the slaughtering industry. Niels has been a dedicated serial entrepreneur, as Ilmer BV has generated several subsidiary businesses and products. Argus CV is one of the most renowned of these companies. Argus CV is a Video Content Analysis software that strives to bridge the gap between slaughterhouse reality and animal welfare. The Argus CV team has spent the past year developing a platform to revolutionise the slaughter industry.

Roy Melsert, humane slaughter expert and Animal Welfare Supervisor at Gosschalk. Since 1996, he is working on animal welfare at slaughterhouses. Next to his job at Gosschalk, he works in his spare time as a consultant and trainer for Eyes on Animals in the humane handling and slaughter of cattle. The last two years he has been particularly occupied with getting abattoirs back on track that have been in the news negatively. He specialises in pigs, cattle and calves and has mastered all the tasks involved in unloading, lairaging, stunning, bleeding and checking for signs of consciousness and life.
Comment
Related
Comment