Africa What Lessons Can We Learn From Rwanda’s Development? 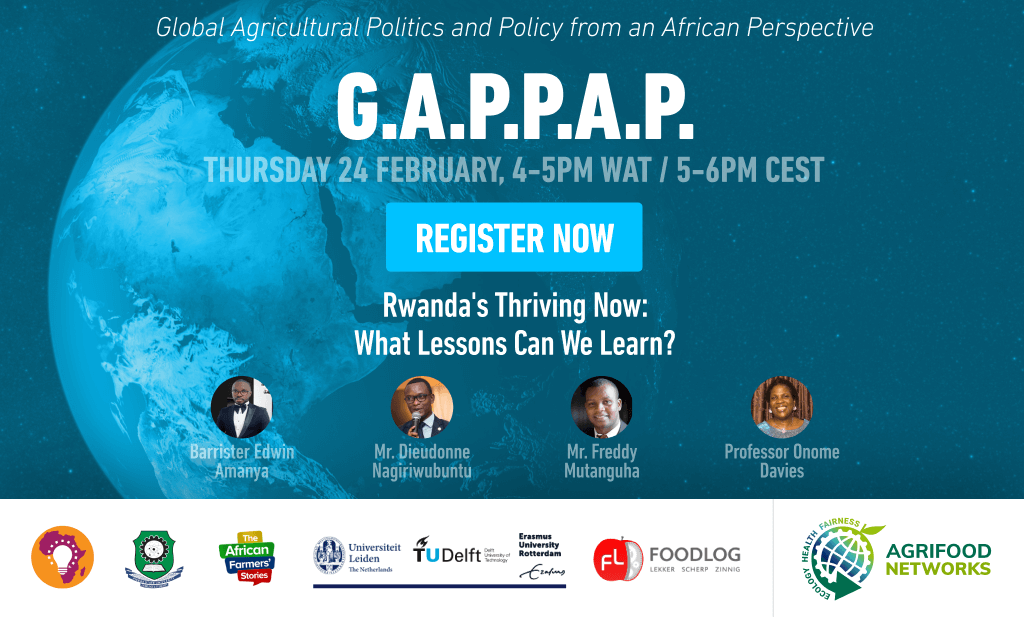 0
Join us for the sixth Global Agricultural Politics and Policy from an African Perspective (G.A.P.P.A.P.) webinar on Thursday 24 February, 4-5PM WAT/5-6PM CET via Zoom. Dick Veerman, founder of Foodlog.nl will talk with our guest speakers (to be announced) about the lessons we can learn from Rwanda's development?


REGISTER HERE!
Upon registration (Free!) you will receive a link to the Zoom-chat.

Following the Genocide against the Tutsi in Rwanda (1994), an atrocity that should have never occurred, Rwanda has become one of the fastest growing economies in the world and has even been coined ‘Africa’s Singapore’. It’s been about 27 years since the genocide, and in this time has launched the one laptop per child programme, to provide primary schools with as many laptops as possible, and to give as many children access to online education. In 2007, they were also the first country in Africa to sign the Comprehensive Africa Agriculture Development Programme, which is an African Union initiative to increase investments in agriculture. Since then, the government’s 10% investment in agriculture has led to a 6% growth in the sector. Rwanda has shown so much growth in the past few years, and how can we learn from their development? In the sixth G.A.P.P.A.P webinar, our panellists will be discussing this question, and sharing their perspectives on the topic.


ABOUT G.A.P.P.A.P.
The Global Agricultural Politics and Policy from an African Perspective webinar series (G.A.P.P.A.P.) is a joint effort of African Farmers Stories (Babatunde Olarewaju), Rivers State University (Dr Ikechi Agbugba), Public Policy in Africa Initiative (Hugue Nkoutchou), AgriFoodNetworks (Dick Veerman) and Leiden-Delft-Erasmus Universities (Coen Hubers). The aim of G.A.P.P.A.P. is to start and moderate dialogue regarding agricultural development in Africa and mobilize a community of involved stakeholders. Nancy Illoh-Nnaji, from Moneyline with Nancy on Africa Independent Television, and Dick Veerman will host the G.A.P.P.A.P. webinar series. Bellow you can find G.A.P.P.A.P.’s former webinars.
1. 1.5x GDP unpaid labour in Africa, how come?
2. Inclusiveness: a precondition for sustainable development?
3. How do we navigate in a culture of nepotism?