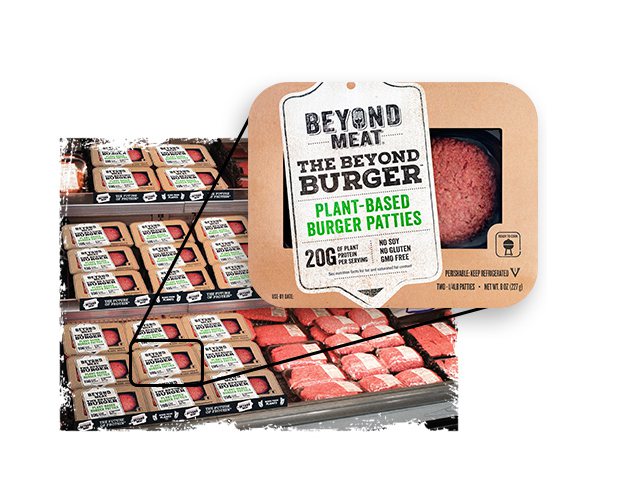 7
Photo credits: Beyond Meat
Recently, the Netherlands has seen a great rise of the production and consumption of plant-based meat substitutes. Plant-based meat substitutes are products that take the place of meat in the human diet and have the appearance, texture, and taste similar to meat products. Total sales of the plant-based meat sector amounts to €174 million, one of the highest in the European Union. Moreover, the trends indicate that growth is only set to increase. Sales of plant-based substitutes have doubled in the last few years.
Related
How did the Netherlands become a world leader in alternative protein? To answer this question, I interviewed two Dutch entrepreneurs and experts in the sector.

The Dutch Government is supporting the protein transition. The Dutch government has adopted a National Protein Strategy. Its main goal is to stimulate the development of alternative proteins. It does so by providing financing opportunities for the sector and by financing research and development (R&D) in alternative protein sources. Recently, the Dutch Government has even forwarded a €25 billion plan to buy out animal farms and cut down livestock numbers, in an effort to reduce the country’s nitrogen emissions.

The strong scientific knowledge base of the country is also fundamental to the rise of plant-based meat substitutes. The Netherlands has been called the Silicon Valley of Food, for its strong science-driven food entrepreneurial ecosystem. Almost 200 agri-food companies within a 10 kilometer radius are present in the Dutch Food Valley around Wageningen and the village of Ochten. In such an ecosystem, technology and innovation are encouraged and are viewed as solutions to the sustainability challenges of the present and future.

The dense network favors what Wouter de Heij, CEO at TOP - an R&D company that helped develop for example The Vegetarian Butcher's products - calls the DNA of collaboration. The notion refers to the knowledge sharing and open innovation practices that happen between companies in the Dutch context. Furthermore, as an agri-food tech power house, the Netherlands can rely on already existing and highly-developed logistical infrastructure, which early-on food startups can rely on.

Next to the material reasons for the development of the sector, there are cultural reasons for this development. Sustainability and animal welfare seem to figure as important motives for Dutch consumers to shift towards alternative protein consumption. A study by Wageningen University found that around 60% of Dutch consumers consider sustainability an important criterion when buying food products.

Dutch consumers are open to try new products, as a result of their ports, trade and colonial history

Dutch Food culture as a driver of innovation
While all these reasons are important, a fundamental element that might set aside the Netherlands from other European countries is its food culture. Dutch food culture is rapidly changing. Wouter de Heij and Jos Hugense, CEO at Meatless, explained the historical reasons behind the Dutch ever-changing food culture. They think Dutch colonial history plays a major role, as it has exposed the country to many different cuisines and diets. After WWII, when levels of globalization were lower than they are today, the Dutch considered for example Indonesian food as a normal part of their diets. As result of the Netherlands ports and trade, Dutch eating habits have been influenced and fused with culinary cultures from different parts of the world for centuries, from Asia as well as from European countries. As a result, Dutch consumers are used to try new products. That helps to create interest in plant-based meat substitutes.

Furthermore, meat analogues are popular in the Netherlands because they are a convenient, ready to eat source of protein. Dutch consumers spend little time on food preparation and tend to prefer products that do not require much effort to be prepared. Plant-based meat substitutes reflect these characteristics, as they offer the client a sustainable source of protein that can be quickly prepared and consumed, without having to alter significantly existing eating habits and practices. In fact, while traditional Dutch diets are heavily based on animal meat, this might have a positive effect on the growth of the plant-based meat substitutes market.
As these are products that are similar in taste, texture and use to animal meat products, substituting them does not require learning new recipes, making them easier to substitute in one’s diet.

In sum, the comparatively high rise of plant-based meat substitutes in the Netherlands can be explained by a variety of interrelated factors. Understanding them is key to share lessons with other countries wishing to accelerate a transition to alternative sources of protein.


Susanna Potestio is Italian (Palermo). She graduated in Political Science at Leiden University in the Netherlands. Currently she is working on a thesis to get her master's degree at Utrecht University (the Netherlands) in Environmental Science. She will share her findings with Agrifoodnetworks.org's community.
Comment
Related
7 comments
Oldest first Latest first

Great story in development, and true. Vega(n) products are quite normal now, growing, and often have a nice texture and taste (for instance also the nice vegan 'Filet Americain'). More and more people here are enjoying them... once in a while....
Question marks can be set at the contents. How healthy are they, how much more healthier can they become? How are the beans treated? Fermented, or soaked for 1 day (important for removing 'bad stuff')? Why is the algae component missing, that contains so much nutritional value, not only good proteins?
Why is the price that high, often more than meat, when the ingredients are that much cheaper (and 'livestock' is fed with the same proteins)?
Financial gaines in the vegan sector - seemingly extra ordinary - I would like to see an explanation for.

Most of the real vegans i know do not often buy these. Consider it as being 'fast food'. Making their own f.i. bean meals, inspired by beautifull recipes. Their own vegan oat milk and yoghurt for 50 cent/liter instead of 2-7 euro. Use tempeh, sea weed. Home made falafel e.a. for 2,50 euro a kilo. Have (developped) an excellent knowledge about the health of all kinds of products, like using fermented products from the far east, black rice and beans, jackfruit etc. Mushrooms.

A small correction, I was part of the founding team of Ojah (vegetarian chicken) and these products are the basis of the products of the Vegetarian Butcher, when the VS started. But I m active in the plant-based domein for almost 25 years, and specifically meat, fish and dairy replacers since 2005.

A lot of innovative companies (small and large) are collaborating in this space, and lots of them are located in the Netherlands. Ingredient suppliers, flavour-houses, textured ingredients manufactures, and converters are pushing the market into better, more taste, cheaper. And ofcourse healthier.

The latest products that my team of TOP did develop are all A nutriscore, no hard fats and salt-contents below 0,8%. Hence, a perfect replacer for animal meat. In the next years you will notice more innovation, growing market and lower prices.

PS if other countries want to acceleratie? Don’t reinvent the wheel but collaborate with practical companies from the Netherlands!

My question: 'Why is the price that high, often more than meat...' hasn't been answered.
The extra ordinary prices of vegan milk/ yoghurt also an issue. Why is that yoghurt that expensive, when te real yoghurt involves a complex production system with far more labour and costs... fed with the same soy? It should be priced less.... also to make it affordable for low incomes.

#2: my favorite vegan chicken at the nearby Toko. For many years. Good in every preparation - from bbq to curry.... Delicious (also my vegan daughter's favo ;). No product here in the supermarket can beat that.... until now. And also jackfruit can give you that 'meat bite' in many meals.
The culture of vegan cooking is an adventure and sensational in tastes - health. Nothing can beat that. Except fast food and a marketing system. The old story in a new coat.
Real changes in cooking culture? That's not putting it in a 'burger'... however tasty once in a while.