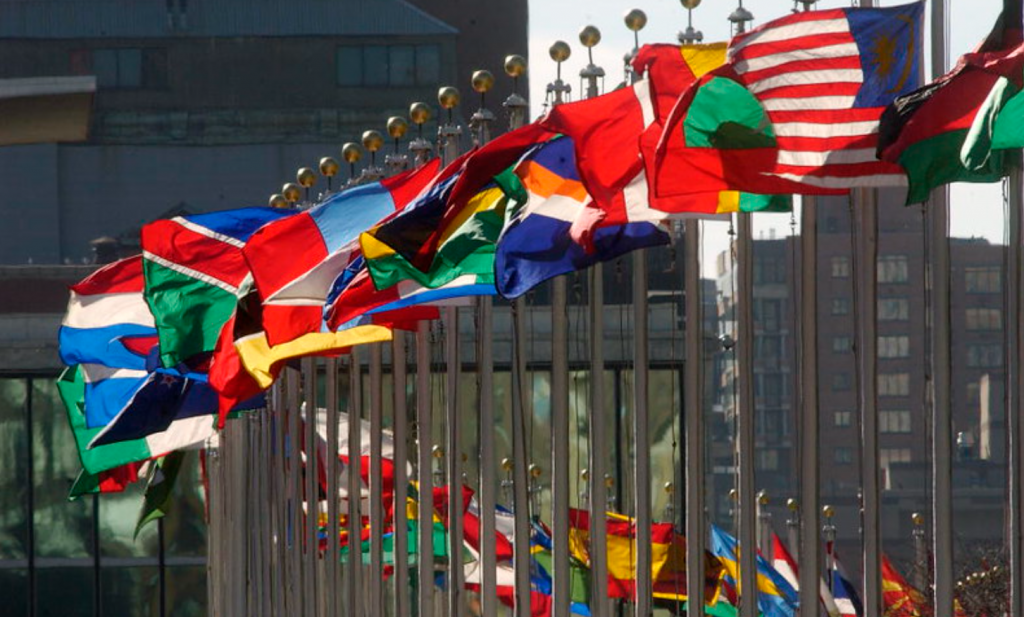 0
Photo credits: 'Flags', United Nations Headquarters New York, UN Photo/Joao Araujo Pinto
Africa has contributed negligibly to the changing climate, with less than 4% of global emissions. Yet it stands out disproportionately as the most vulnerable region in the world.
Related
It was therefore fitting that the UN climate change conference last year, COP27, was hosted in Sharm el-Sheikh, Egypt.

The African continent is facing some of the severest effects from climate change seen in a decade. In 2022 every part of Africa was affected by extreme weather events and slow-onset processes. These ranged from wildfires in Algeria to catastrophic flooding in South and West Africa. The Horn of Africa is witnessing the worst drought in 40 years; Mozambique has had a devastating cyclone season. There have been historic floods for a fourth consecutive year in South Sudan and Sudan.

These extreme events in the continent killed at least 4,000 people and affected a further 19 million in 2022 alone.

For many, the COP27 hosted in Africa provided an excellent opportunity to draw the global community’s attention to the enormous issues the continent is already facing. And for the world to reach a consensus on how we are to avoid a climate catastrophe.

The conference created history when it resulted in the establishment of a loss and damage fund to aid nations particularly vulnerable to the climate crisis, an agreement on a worldwide energy transition (e.g. the establishment of a work programme on just transition), and the implementation of Africa’s green infrastructure development. In spite of this, the discussion excluded the phasing-out of fossil fuels. It also provided little indication that nations were serious about scaling up efforts to cut emissions.

These disappointing outcomes serve as a wake-up call for African leaders to re-assess the relevance of conference of the parties processes to the African people and take radical actions to strengthen Africa’s voice and participation in future events.

Notable milestones
The topic of funding mechanisms for loss and damage was added to the negotiations agenda at the eleventh hour. Yet it became COP27’s most significant legacy.

Wealthy nations agreed to assist developing countries that are particularly vulnerable to the effects of climate change in responding to loss and damage from extreme weather events and slow onset events. This achievement is significant for Africa: seven out of the 10 world’s most climate-vulnerable countries are in Africa, according to the ND-Gain vulnerability index.

Relatedly, COP27 also saw the Group of Seven (G7) and Vulnerable 20 Group of Finance Ministers (V20) launching a new insurance system to provide financial aid to vulnerable nations hit by the effects of climate change, called the Global Shield. It will receive an initial €200million of funding. Early recipients of this financing include Ghana, Pakistan, and Bangladesh.

Another key outcome of COP27 was agreement on the need to ensure that Africa’s role in the global energy transition could not be at the expense of the region’s industrialisation goals. The region’s leaders are adopting strategies to enhance energy generation and adaptation targets while delivering on respective national environmental protection priorities, sustainable growth, and job creation.

COP27 also witnessed the launch of the Alliance for Green Infrastructure in Africa by the African Development Bank, African Union and Africa50 Infrastructure Investment platform, alongside other global partners.

The alliance aims to generate a robust pipeline of bankable transformational projects and catalyse financing at scale for Africa’s infrastructure development.

Finally, the African Group of Negotiators on Climate Change played a very active role in the operationalisation of the Global Goal on Adaptation, a task due since the Paris Agreement in 2015.

Disappointments
The conference of parties failed on a number of fronts.

It failed to promote the climate action required to maintain the possibility of limiting climate change within the parameters of the Paris agreement. The Paris Agreement is a legally binding international treaty on climate change to limit global warming to well below 2 degrees, preferably to 1.5 degrees Celsius.

Secondly, despite the notable achievements made on loss and damage, there was no consensus on the size of the loss and damage fund stream, who pays – and, most importantly, who controls and manages the fund.

Similarly, significant collective progress is yet to be made on the phasing out of all fossil fuels. It is important to stress that loss and damage cannot be adequately addressed without tackling the root causes of the climate crisis. Continued fossil fuel addiction will worsen the unprecedented impacts of climate change and lead to the continued devastation of vulnerable countries.

Another weakness was that all of the agreements negotiated in Egypt are structured to be binding. But there are few mechanisms to enforce them. This raises the risk that the gathering, and others like it, translates into nothing more than good intentions.

The voices of local actors, who were present at COP27 side events, weren’t sufficiently incorporated into the international negotiations. This could be attributed to the existing structure of the conference, which only allows state members at the negotiation table.

What next?
The growing frequency and persistence of climate-related disasters in Africa requires an annual average of US$124 billion to adapt. As of today, African countries are getting roughly US$28 billion a year.

Developed countries and wealthier emerging economies must contribute to adaptation funds and a transparent and effective loss and damage fund. This idea will need to be at the heart of COP28 negotiations, as money will need to be put on the table for adaptation, loss and damage, and a rapid ramp-up of renewables with clear mechanisms for mobilising finance and implementation.

As we head towards COP28 in Dubai in November 2023, it is essential to start the negotiation now so that all countries are prepared to get to an explicit agreement in the end.

The next COP must run an open and transparent process so that all countries understand what is being negotiated and trust can be repaired.